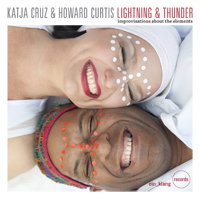 1) Lightning & Thunder
2) Earth
3) Water
4) Air
5) Firewatch video: “Earth”
This music seems to me as not yet music, like a kind of music before music; the syllables a kind of language before language. Something forgotten that we can now remember again. Together with the percussion it seems not so much a dialog as a looking into a common direction together, grappling for wording, struggling to find the complex, breathing whole, before the whole can be defined as such.
Wolfgang Seierl, April 2012“Lightning & Thunder” follows on from the album “Primeval Sounds of the World”, recorded two years earlier. It represents a continuation of my search for the inner link between contemporary music with the ancient sounds of this world, this planet, that is so important to me. It is listening to creation, with its abundance of elements and forms of expression. It is also an advancing, a search for song that is abstract, pure and intuitive, unfettered by form and melody.
For me, drums, marimba and gongs are the perfect combination: Skillfully, Howard lays a foundation with his rhythms while at the same time dissolving time and meter, opening up a space in which advance and retrospection do not represent two different directions but meet at a single point at which time does not exist. And here, percussion and voice become one.
Katja Cruz, April 2012