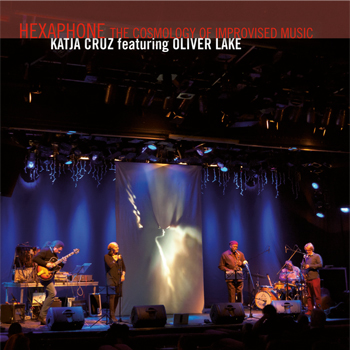 I started to work on the idea of “Hexaphone” in 2011. As I was always fascinated by the inner forms and constructions of creation, my interest fell on these beautiful geometric forms of the platonic bodies.

These geometries are perfect in balance and equality – a Platonic solid is a regular, convex polyhedron with congruent faces of regular polygons and the same number of faces meeting at each vertex.

So I took these forms, split them up, and used them to create graphic notations. This means that the musicians had to read graphics instead of musical notes. Further I asked Patrik Lechner to make visuals based on these forms, as I also wanted to demonstrate the connection between music and geometries to the audience. Ever since I was born I have had a synesthetic ability, so for me sound and colour– both of which I have worked with as an artist – are only different ways of expressing the same thing, thought or feeling, the only difference being that colours have a higher frequency. In my understanding of the world every thing and all nature IS sound. I was therefore very curious as to what music would develop out of these geometries, and also of these very old symbols I used for the second part of “Hexaphone”.

This second part searches for the meaning of hexagon, hexagram and the flower of life (which is derived from the hexagon). The hexagon is found in the honeycombs of beehives, the hexagram and the flower of life are very old symbols: They can be found in all cultures and in many different religions. The harmony between divine and worldly, the contact between heaven and earth, the union of masculine and feminine energy, and the fusion of visible and invisible world are the topics of this part of the project.

So, of course, I had to put a 6-piece band together.

I’m very happy that Oliver Lake was playing on “Hexaphone”. It was a great experience to work with him: Oliver Lake plays what he thinks, which is fantastic. I was curious as to how it would work out to put him on stage together with a young musician – Patrik Lechner, who programs electronic music (this being generally considered the music of today) and who works with iliatoric components comprising both sound and visuals.

Howard Curtis, also being my duo partner, fantastically lays out a foundation with his rhythms while, at the same time, opening up a timeless space.

These were my thoughts that formed the basis for “Hexaphone – the cosmology of improvised music”. I love the result. I really think that it is an outstanding musical and visual avantgarde work.

Hexaphone is a cosmology of improvisation. These are the coordinates provided by the title of the new multi-form work published by Rudi Records. A multimedia project led by Austrian singer Katja Cruz. The “Hexaphone” music is the real-time interpretation of graphic scores based on the geometry of the platonic bodies. Furthermore the complex geometry of the “flower of life” and the “hexagram” appear as a source of inspiration for the music comprised in “Hexaphone.”