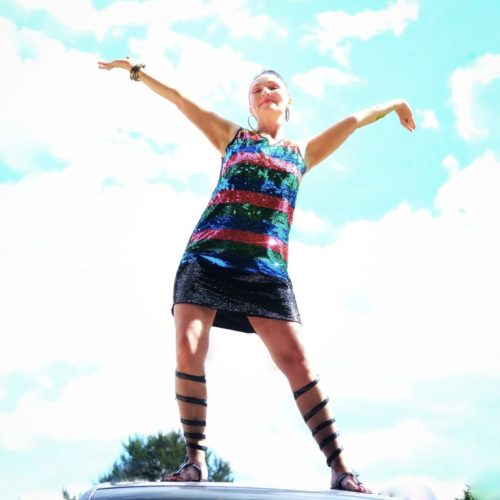 CHILDHOOD:
When I was a child I spent a lot of time out in the little wood next to our house. I knew every single tree there, I climbed them, and sitting on their branches, leaned to their trunk, listening to the sound of the leaves and the wind, dreaming of me being a little Indian, I realized: Everything is sound.

My way to becoming a professional musician was tricky and hard.
Although I’ve had classical piano training starting with age 5, it was not even thinkable to become a musician. Middle-class girls like me were raised to get married, have children, and – in my case – become a teacher. Well, this was not MY idea about my life. So I got the outcast of my family.

FINE ARTIST:
The rest I try to make very short: I studied philosophy for a while and got two boys. As my then-husband didn’t want me to be a singer (he was a singer and guitarist), I was working as a freelance fine artist for several years, had collaborations with contemporary composers (such as Georg Friedrich Haas, Gerd Kühr etc.), and was very successful getting big orders for huge paintings as well as for sculptures for the University for Music and Dramatic Arts (KUG), for example. Some of my sculptures you can still see at Palais Meran Park in the center of Graz, Austria.

BREAKDOWN:
BUT: I was not happy. I had a complete breakdown and lost all power in my hands, arms, and legs. I couldn’t tighten the huge canvases over their wooden frames any more, almost couldn’t move any more.

By that time my parents had organized a mass for my beloved brother, who died several years ago. I was singing his favorite song in the church, My Way.
The tears I had hold back for so long were coming with me singing there. And deep inside I understood: This is where I have to go.

SINGER:
So I had to learn a lot. I started with a program of French Chanson, Tango cancion and also had a Latin Band. My preference for contemporary music by that time then led me into free improvised music. I started acting on a professional level and on international stages, such as New York (at The Stone e.g.), London (Vortex Club), Venice (Conservatory and open air) etc., playing with Free Jazz legend Oliver Lake, with Warren Smith, young New York composer and musician Darius Jones, recording live at Porgy & Bess, Vienna, and so on.

My next breakdown came with another divorce. Having two more lovely children in the meanwhile I didn’t know how to continue. I stopped playing and concentrated on teaching (private singing lessons) and studying musicology, with special focus on aesthetics and gender and the research on jazz and popular music. By now I’m writing my bachelor’s thesis on Carole King, Björk and P!nk. These ladies belong to my heroes, as well as Alicia Keys, Emeli Sandé, Amy Winehouse, Queen and David Bowie.

SONGWRITER:
Through these years I was (and still I am) in continuous conversation with a friend and author in Berlin. After kilometers of Emails I decided one day to answer through a song. And this is how I started my songwriting.

Now I know that songwriting and performing my songs is the Love Of My Life (the one that never will leave me).

LET’S ROCK POP:
COOL POP! is my very start in pop music, and I hope you’ll love it as much as I do!

Working just in duo we did some synthesizer programming to unchain me from the piano for a few songs. Right now I’m working on the next album, this time with full band.

I LOVE YOU ALL being out there. And through my music I want to share this love with you. And on stage I want to be as close to you as possible, and I want us to sing and dance together, to scream and shout, and enjoy life with my upcoming new program.

You also find me on Facebook and Instagram, and I absolutely appreciate you as a follower to stay connected!